Past, present, future – it is all in the sky (Erasmus+)

The Erasmus+ project Past, present, future – it is all in the sky tackles the topic of astronomy, a subject little studied in the Romanian curriculum. Astronomy combines physics, chemistry, geology, math and you use them all to discover the universe. The project is structured into 3 categories, as the title suggests: the past, the present and the future.

This school year the students went on pursuit of knowledge about the past, which would enrich students’ knowledge of the astronomy achievements of the ancient Greeks, Sumerians and Egyptians, Copernicus, Galileo and Helvetius, as well as the discovery of legends and stories about the origin of the cosmos, planets and stars. All these activities aimed to compare Europe’s common cultural heritage and to identify the differences and similarities between countries and their astronomy history.

The students took part in the World Space Week Project, which took place between October 4-10. This year’s theme was „Satellites Improve Our Lives” and aimed to encourage students and the public to learn about the usefulness of satellites, especially the many ways in which they improve life on Earth. A first step was to observe the satellites in their own yard or house, which does not involve the use of binoculars or telescopes and can be seen in the sky with the naked eye. The students made drawings, posters and PowerPoint presentations with the given topic.

The second activity was an exhibition of famous astronomers of the past. The exhibition included drawings of Galileo Galilei, Giordano Bruno, Leonardo da Vinci, Nicolaus Copernicus. The older students created a mini-magazine of their work, including information about famous astronomers. flipsnack.com/B76656DD75E/gallery-of-famous-astronomers.html

The older students made research on the internet about the legends or stories connected to the appearance of cosmos, of the planets and the stars, of the Moon and the Sun. They created beautiful love letters after listening to the love poem of Renata Suzuki “A letter to the Sun from the dark Side of the Moon.”.

On the occasion of the European Night of Open Museums (14th November 2020) the students watched a series of 4 videos from the permanent exhibition „Discovering the Universe Together: Astronomy Exhibition”, organized by the Admiral Vasile Urseanu Astronomical Observatory, with Adrian Șonka and Tudor Mihăescu, museographers at the Astronomical Observatory Admiral Vasile Urseanu.

An interesting activity was the creation of a mini-book with the students’ research on the about astronomy from its beginnings to Isaac Newton. The purpose of the activity was to provide a brief overview of the history of astronomy in different regions of the world in order to demonstrate that astronomy has always been in the interest of peoples. Just as ancient peoples were curious to know the sky and wanted to know the place of mankind in the universe, for the same reasons today’s astronomers relied on past discoveries. Theoretical and observational discoveries pushed our understanding of the universe from Ptolemy’s geocentric conception to Copernicus’ heliocentric hypothesis, then to the discovery that the solar system is not at the center of our galaxy, to the understanding of galaxies distributed in the universe.

After the frontal discussions with the students, they were divided into 6 groups and made projects about how people viewed astronomy in various periods: prehistory, ancient Greeks, ancient Egypt, ancient astronomy, Mayan astronomy, Chinese astronomy: read.bookcreator.com/MtTH8F0kPIa4v48LeFMyoLL0qXE2/A6Hchic2QceYcjTYNn_QZg 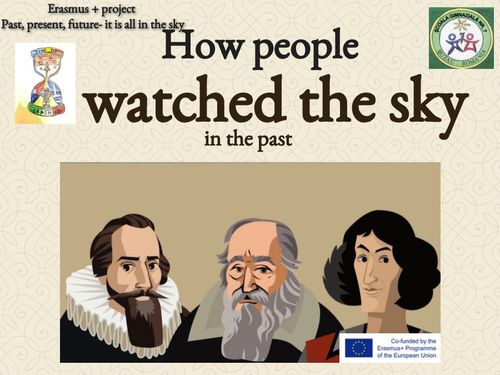 How people watched the sky in the past

The next activity was the creation of an online dictionary of astronomical terms in the languages of the project partners: allinthesky.eu/astronomical-dictionary.html

In May 2021, the students of the 5th C and 6th D classes took photos of the Moon at different periods in May and at different times.
The purpose of the activity was to provide students with information on how to take the best photos of the Moon, which is the right time to capture the Moon. Students previously discussed about the Pink Moon, a unique astronomical phenomenon that took place on April 27, 2021. The Super Pink Moon is a special astronomical phenomenon that can be seen with the naked eye in the sky. It occurs when the Earth’s satellite is at the shortest distance from Earth.

That night the moon was full and brighter, as usual, being a worldwide attraction for observers of celestial bodies. The moon was at the smallest distance from Earth, and this is why we will see a Super Moon. Undoubtedly, the size of the satellite remains the same, the star orbiting an ellipse around the Earth.

There were also a number of 7 lessons for young learners to be introduced to the vocabulary about space, look at the planets in the solar system and features of the planets. The students invented their own planet after reading “The Little Prince” and presented them to the class.

The next school year we will focus on activities about the present, on observing the sky, we will have trips to astronomical observatories and planetariums, but also on workshop papers and expanding students’ knowledge about the solar system, planets and the most interesting stars visible in the sky.

The activities about the future will present to the students the vision of life in space through literature and film. The purpose of this stage is to encourage our students to develop their creativity and stimulate interest in astronomy, necessary for the later stages of their education. Among children, this field can mean his future, possibly a career, and children need to „try” as much as possible until they discover what attracts them the most.